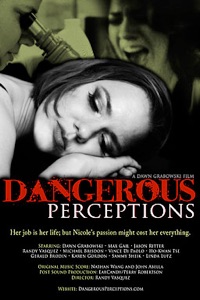 This film was not completed until 2010. It was originally entered into the IMDB Database when pre-production began in 2005. The name was changed in post-production upon completion however we have been unsuccessful in correcting the incorrect listing information within the IMDB Database. Currently the film is being shopped for distribution.

“Her Job is her life; but Nicole’s passion might cost her everything.”

Visit www.DangerousPerceptions.com to view the trailer, productions stills, and much more.

DANGEROUS PERCEPTIONS was an Official Selection at Action On Film Festival, 2016 with two award nominations and one win: